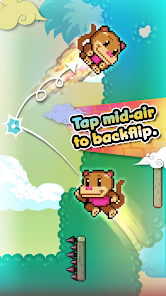 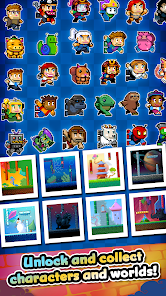 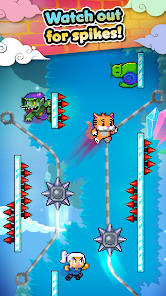 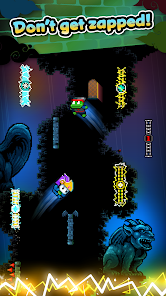 Start your fascinating adventure to different dimensions in Wall Kickers. This is the unique tactical action game you can ever experience. To be able to participate in our difficult missions officially, choose one of the dozens of adorable characters to control. It can be a fish or a unicorn… all like professional astronauts. Show your ingenuity when controlling the character to overcome obstacles in many different environments. Tap the bricks to move on, and don’t forget to collect coins!

START THE DIFFICULT JOURNEY FROM THE GROUND, SKILLFULLY MOVE TO ADVANCE

Do you want to choose exciting games to test your patience? Wall Kickers, neither fights nor the usual puzzles, takes on a whole new special genre. This can be considered an interesting and equally exciting adventure when you control your participating character and complete challenges. Players will officially begin their difficult journey at launch and start right on the ground. You have to calculate so that your character gently moves upwards; the higher, the better.

The gameplay of Wall Kickers is extremely simple. Players only need to control the character to touch the walls and, of course, have to hold the screen as long as possible to move. Make sure your character doesn’t fall to the ground, or else the challenge may fail from there. In the process of performing interesting missions, players need to be careful not to touch the gaps. And of course, you also need to collect as much money as possible during the competition if you want to have more opportunities to buy items later.

DODGE THE THORNY OBSTACLES, SO YOU DON’T DIE IN THE FIRST PLACE

The game becomes more difficult the deeper you progress into our challenges. Of course, the attractiveness is also increased, making the player even more excited. As mentioned above, you are not allowed to touch the gaps so as not to fall. Not only that, but you also need to show your ingenuity in challenging levels by dodging all the thorny obstacles. If you touch them, of course, you will die and have to start over that level from the beginning.

During the tough quests created in Wall Kickers. Players need to show amazing upside-down skills to be able to overcome obstacles. When you use unique moves to complete challenges, you will better get a higher score. Of course, the amount of bonus you receive is also outstanding. Use it to purchase items and upgrade your character’s unique abilities. Or open up more healing possibilities and more lives.

CONTROL DOZENS OF ADORABLE CHARACTERS AND UNLOCK MORE IF YOU WIN

Maybe you’ll be surprised by the adorable characters you control in this game. It wasn’t a human, nor was it a ghost warrior. They are simply adorable animals of many different species. It’s great that you will get the opportunity to own eight brand-new characters in this new version. It can be fish or unicorns,… all of them are adorable and have special abilities. However, when you first start playing, you only own one (several) characters, and the rest you will unlock yourself when you win the next levels.

COMPLETE IN DIFFERENT WEATHER ENVIRONMENTS IN HUNDREDS OF LEVELS

Wall Kickers gives players hundreds of challenging levels of varying difficulty. The higher you go, the more complex the difficulty increases, along with more obstacles. It will appear randomly, and you need to pay attention to avoid unfortunate collisions. Players will be competing in many different environments, even in space. Along with that are unique weather effects that increase the difficulty of the missions.